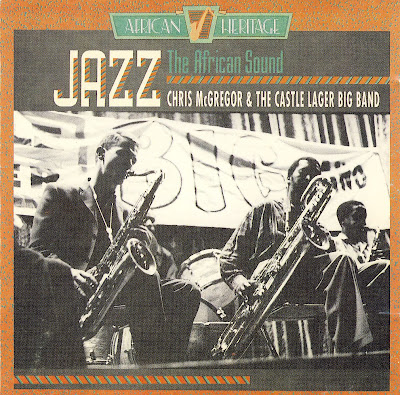 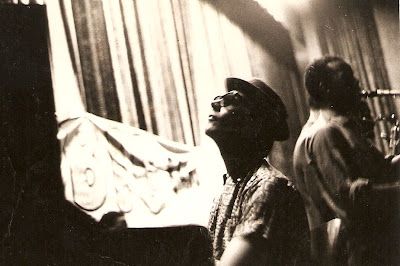 “The African Sound … spells out clearly the character and direction of South African jazz towards its own territorial identity – a vigorous, lively, good-humoured swing which you will not find anywhere else on earth, North America included.” So wrote the Johannesburg Star’s critic Richard McNeill of the original release of this album.

The uniqueness also came from the fact that the band which made it had a very circumscribed life – the band was together for a total of three weeks, during which time they rehearsed, did a number of concerts and the recording.

In September of 1963 there was a jazz festival at the Moroka-Jabavu Stadium in Soweto. This festival was underwritten by the brewers of Castle Lager Beer, South African Breweries (now SABMiller). All the best-known names in South African jazz were there and, although the festival itself was not a great success, some great music emerged from it.

“Chris took advantage of the proximity of all the best jazz musicians in the country to persuade the breweries to back him in another venture – a big (17-piece) band with the musicians of his choice. They gave him a week to arrange, teach and rehearse with the band, and during that time he did not sleep at all. Chris was not given to arranging music very fast; he gave a lot of thought and time to his work, but once done he rarely had to amend anything. He would sit up all night writing the arrangements and during the days set about teaching each musician his part and trying them out together. Not all the musicians could read music which was an added complication, but as they were used to playing by ear they were astonishingly quick to pick up the arrangements. Twenty-four hours for each song, seven by the end of the first week; then they played several concerts in the townships round Johannesburg and in Benoni and Boksburg.”

The result was a band that, in spite of their different backgrounds and experience, came together in an amazing way to make some truly original and beautiful music, a classic in South African jazz.

It was a project that pianist, composer and arranger Chris McGregor had been dreaming of for some time: “I have waited for years to hear a band composed of the brightest stars in South African jazz and my note-books are full of projected personnel and worthwhile compositions for such a venture, the fruits of listening to and being involved with this lovely thing, jazz music in South Africa,” he wrote in the liner notes to the album.

As McGregor would say in an interview with Graham Lock some 20 years later: “I’m an absolute nut for big bands. I love the colours and the energy flow of big groups. I’ve always been ultra-attracted by that organisation and putting-together capacity that was so uniquely Duke’s. I love playing, arranging, composing – the lot!”

McGregor’s love for “playing, arranging, composing” certainly comes through on this album: two of the six numbers are his own compositions, all the arrangements and of course he is leading the whole enterprise from the piano. The other four compositions on the album are two each from Kippie Morolong Moeketsi and Dollar Brand (Abdullah Ibrahim).

The album opens with Kippie’s song “Switch” which McGregor arranged “to showcase his alto playing.” It’s a medium-tempo number which McGregor writes “has no real key but has a feeling of departure and return through the riff used as introduction and coda.”At just more than six minutes it is the longest track on the album.

Next up is Dollar Brand’s “Kippie” which, as McGregor writes, “was composed by Dollar to express the way he feels about Kippie and I have arranged to express the way I feel about both of them.” After a short ensemble opening, there follows a long passage of piano, bass and drums, setting the generally reflective tone of the piece. The bridge before Kippie enters on clarinet is carried by two tenors and another alto (Nikele Moyake, Ronnie Beer and Dudu Pukwana). Kippie’s clarinet solo is simply stunning, and at its end I keep wishing for more. The somewhat Ellingtonian climax with all the horns leads into Kippie’s soulful ending.

The mood changes abruptly with the energetic opening bars of Brand’s “Eclipse at Dawn”, in which the theme is laid down by Kippie on clarinet, accompanied by Dudu Pukwana on alto and Mongezi Feza on muted trumpet, before an understated but swinging piano solo by McGregor before Kippie gets down with his clarinet again, swinging like crazy! Kippie’s solo is followed by a great tenor solo by Nikele Moyake. Some great trombone sounds in the bridge and then it’s back to the theme with Kippie, Dudu and Mongezi.

Eight years later McGregor would again record Eclipse at Dawn, this time with the Brotherhood of Breath at the 1971 Berliner Jazztage festival. This time the song becomes the springboard for an exuberant free blow, introduced by a long, slow introduction with a mostly bowed bass by Harry Miller leading interpolations from various instruments. In this version of the tune McGregor’s piano is hardly heard at all and the solos are taken by Nick Evans on trombone and Mike Osborne on alto. Altogether a very different take on the song showing what a difference exposure to the freer jazz atmosphere of Europe had made to both McGregor and Pukwana, who were in fact the only two musicians on this album who had also been part of The African Sound.

But back to The African Sound. The next track is the swinging, up-tempo “Early Bird” by McGregor, a tribute to drummer “Early Bird” Mabusa. It is marked by energetic ensemble playing by all the horns in dynamic exchanges with Mabusa’s drums, plus some great solo work by, among others, a young and up-coming alto player Barney Rachabane whose passion and exciting playing are already noticeable. An elegant solo by McGregor is also a feature of the track.

After all the energy of “Early Bird” comes Kippie’s reflective, beautiful ballad “I Remember Billy”, his clarinet leading into some wonderfully sonorous phrases from the whole band, with muted trumpets adding gentle highlights to the sonic landscape. The brass section really dominates for a few minutes before Kippie comes back with some soulful clarinet responses, before he signs off the whole thing.

Next up is another McGregor tune listed on the album as “Now” but more usually called “Manje” which is the Xhosa word for “now”. This is the only tune on this album apart from “Eclipse at Dawn” that McGregor recorded elsewhere. It was recorded twice by McGregor’s group The Blue Notes in the following year, 1964, on albums released many years later called respectively “Township Bop” and “The Blue Notes Legacy”. It was recorded twice again in 1971, this time by McGregor’s later big band the Brotherhood of Breath, on albums also released many years later: “Bremen to Bridgwater” and “Eclipse at Dawn”. Another version of the song was recorded in 1975 and also released on the “Bremen to Bridgewater” album. The Blue Notes came back to the song in 1977 on an album called “The Blue Notes in Concert Volume 1” released by Ogun in 1978.

As McGregor wrote in the liner notes this song was “about” Nikele Moyake, the great tenor player who does most of the soloing during this big band showcase number, with the rest of the horns roaring enthusiastically behind him. A fitting end to a great album of classic South African jazz.

The masters of this album were lost from the Gallo tape vaults and could not be found when the company wanted to re-release it as part of their “African Heritage” series. The re-release was made possible by a South African jazz who used to buy two copies of any South African jazz album he liked, and typically kept one of the copies sealed and unplayed. Luckily he had such a copy of this album and the CD was mastered from the sealed, unplayed vinyl. Fortunately the sound of the original album was so good that the re-mastering from vinyl was very successful and the CD sounds amazingly fresh and full.