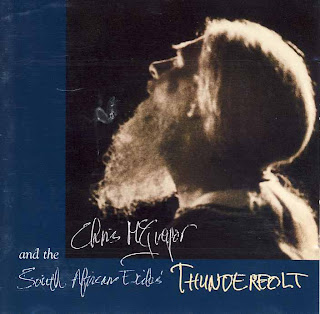 When South African exile musician Chris McGregor died in May 1990, there was already a respectable, though not entirely representative, discography of his work, both in Europe and in South Africa. But like any jazz musician, he played gigs all over the UK and Europe, some of which were recorded, but never released.
Since his death a number of albums of previously un-released material have come out and they fill in the gaps most admirably. The albums are both of live gigs and studio recordings and they make interesting listening.
The last album that Chris recorded with the Brotherhood of Breath in a studio was the great Virgin release Country Cooking (1988) (released again in 2001 on French label Great Winds/Musea). It is a great album, possibly the greatest Brotherhood album.
In 1989 Chris was on tour with the Brotherhood with guest artist Archie Shepp. They played a concert at the Banlieues Bleues in Paris which was released as En Concert a Banlieues Bleues in 1989 on the French label 52 Rue Est. This album features some great solos by the guest and the usual band members, but unfortunately it also features a rather out of tune piano. Chris had wanted to stop the release of the album, feeling it was not up to standard, but for contractual reasons the release had to go on. The music is nevertheless great – a wonderful song called “Sangena” sung by Sonti Mndebele, with the band roaring enthusiastically behind her, is just a delight.
The band was on tour again in early 1990. Chris fell ill on the tour and died before it had been completed. The following are the releases of previously unreleased recordings issued after Chris's death

In 1986 Chris put together a band which he called the “South African Exiles' Thunderbolt.” This band was in a sense a musical response to the situation back in South Africa where then President P.W. Botha had decreed a “State of Emergency”, basically martial law, in an attempt to contain the rising resistance to apartheid. Personal freedoms and other freedoms like that of the press were being systematically, sometimes quite brutally, suppressed. People lived in constant fear and anger, and violence was increasing dramatically. At the forefront of the resistance, though not of the violence, was an organisation called the United Democratic Front (UDF).
The Thunderbolt went on tour through Europe playing many festivals and other gigs. This album was recorded at Mainz, Germany, on 17 May 1986.
Chris wrote the following “personal statement” to explain how he saw the Thunderbolt project: “Humanity is essentially a unity. The realisation of this unity on earth is our greatest task today. This is not idealistic – it is the only chance the human race has to survive on this earth. We come from a society in which separateness – apartheid – is institutionalised. The destructive power of this separation becomes daily more obvious. We wish our Thunderbolt to be a celebration of the end of separateness and its concomitant fascist oppression – for we know that the present murderous attacks on innocent and powerless people represent the dying throes of a monster. Our music, song and dance are also an affirmation of human values – we give them to show appreciation to those who realise that our struggle is theirs also. The world wide interest in events in South Africa and near universal condemnation of apartheid is a potent indication of the dawning unity of humankind.” (from the liner notes of the CD).
The musicians on the gig were, with one exception, South Africans long in exile: Dudu Pukwana, the ebullient alto player; Johnny Mbizo Dyani and Ernest Mothle, great bassists, great musicians, great people; Gilbert Matthews, master drummer; Pinise Saul, wonderful singer; and great guitarist Lucky Ranku, although he is not, for some reason, credited.
One of the outstanding tracks is “Magwazakazo” which features Ranku in a performance of rare beauty. Another track of note is “UDF” composed by Dyani in tribute to the organisation “back home.”
The album was released in 1997 by Popular African Music, a label of Günter Gretz.

Cuneiform Records of Silver Spring, Maryland, USA, released three live albums of Brotherhood of Breath gigs.
The first of these was called Travelling Somewhere and was recorded in January 1973 in Berlin. It was exceptionally well recorded and shows the Brotherhood in fine fettle. The line up consists of Harry Beckett, Mark Charig and Mongezi Feza (trumpets), Nick Evans and Malcolm Griffiths (trombones), Mike Osborne, Evan Parker, Dudu Pukwana and Gary Windo (saxes), Chris McGregor (piano), Harry Miller (double bass) and Louis Moholo-Moholo (drums).
The second, released in 2004, is a double album called Bremen to Bridgwater and actually covers three gigs: the first gig was a Radio Bremen concert at Lila Eule in June 1971; the second gig was at the Bridgwater Art Centre, Bridgwater, England in February 1975; the third, also at the Bridgewater, in November 1975.
The third album, called Eclipse at Dawn, was released in 2008 and was recorded in November 1971 at the Berliner Philharmonie Jazztage.
These three albums show the Brotherhood in great form. The Bremen to Bridgwater album has several tracks of extended playing featuring the trademark Brotherhood mix of great playing to written charts with some ecstatic moments of free playing – order dissolving into chaos and coming back to order again, which was Chris's great genius, being able to write charts of exceptional beauty while feeling comfortable to let the players also express their own ideas and feelings.
There are on this album also two tracks simply called “untitled original”, one by that wonderful British alto player Mike Osborne and one by Chris.
The Bridgewater album also has a great mix of great names in British and European jazz in the lineup: Harry Beckett on trumpet; Elton Dean and Mike Osborne on alto; Nick Evans and Malcolm Griffiths on trombone; Evan Parker and Alan Skidmore and Gary Windo on tenors; and of course the great South Africans Dudu Pukwana on alto; Mongezi Feza on trumpet; Harry Miller on bass and Louis Moholo-Moholo on drums. A powerful line up indeed, with Chris urging the whole outfit on from the piano.
The Eclipse at Dawn album has more modest line up that still burns with bright energy: the ever-steady Harry Beckett and Marc Charig on trumpet; Nick Evans and Malcolm Griffiths on trombone; Harry Miller on bass; Louis Moholo-Moholo on drums; Dudu Pukwana on alto and Alan Skidmore and Gary Windo on tenor.
All three albums are superb productions with great liner notes and photos. More about them can be found here: http://www.cuneiformrecords.com/bandshtml/brotherhood.html

In 2008 English record company Fledg'ling released two albums which had been recorded in 1969 by producer Joe Boyd and not released at the time. As Boyd writes in the liner notes to the first of these albums, Up To Earth, “It's hard to remember why this record never got released. I suppose it was because my relationship with Polydor had soured and my new ally, Island Records, was not exactly a jazz label.”
“I do remember,” he goes on, “however, how exciting were the sessions.”
These two albums, Up To Earth, which features a septet of the best of jazz musicians playing in Britain at the time, and Our Prayer, showcase Chris's music starting to evolve from its roots into a new space and energy.
The musicians on Up To Earth were some British musicians Chris enjoyed playing with, and the US/French bassist Barre Philips. The others in the septet were John Surman on bass clarinet or baritone sax; Evan Parker on tenor; and the South Africans Dudu Pukwana on alto, Mongezi Feza on trumpet and Louis Moholo-Moholo on drums. Danny Thompson replaced Barre Philips on one track.
Our Prayer was a trio date with Barre Philips on bass and Louis Moholo-Moholo on drums. It ranges from jaunty African rhythms to some rather free playing with Chris's percussive playing keeping it all together.
As Boyd wrote in his liner notes to Up To Earth: “One day, when critics start to absorb the compositions, the arrangements, the orchestras, the tours, the solos, the visions, the leadership and the musicians he inspired, Chris McGregor will be appreciated for the giant he was.”
More information about these two albums, plus the Chris McGregor re-releases by Fledg'ling, can be found here: http://www.thebeesknees.com/?cat=10
Fledg'ling have undertaken a “campaign to document Chris McGregor’s Witchseason recordings from the late 1960s early 1970s”, of which these two albums are a part.
These two albums can also be downloaded from emusic, as well as the other Fledg'ling releases.

The final album of these posthumous releases is a curious one, curious in how it came about. It is called Township Bop and was released in 2002 by Proper Records. The 14 tracks on the album were all recorded in the Cape Town studios of the South African Broadcasting Corporation (SABC) in early 1964. How the tapes of these recordings came into the possession of Proper Records is something of a mystery, and one which perhaps we should not delve into too deeply.
What is interesting about these tracks is that they were the first recordings made by the group which Chris put together in Cape Town in the early 1960s and which soon became known as the Blue Notes.
Chris was experimenting with different musicians and different ideas and with these musicians soon went on a tour of South Africa just before leaving for the Antibes Jazz Festival where the Blue Notes created quite a stir that year, European jazz fans never having heard something like this from South Africa before. It was an eye-opener to many that such music was happening there.

Altogether these seven albums add considerably to the richness of the heritage of the South African exile musicians. They are important documents of the South African jazz diaspora. They are a great source of wonderful, exciting and original jazz, with a typically South African edge despite the European influences. To quote Joe Boyd again: “Loud, wild, fast, abstract playing to be sure, but it seemed that for them, the best revenge on the murderous Boers was not anger, but joy and yes, exuberance.” And these albums are all full of that.

The text and all images on this page, unless otherwise indicated, are by Tony McGregor who hereby asserts his copyright on the material. Should you wish to use any of the text or images feel free to do so with proper attribution and, if possible, a link back to this page. Thank you.
© Tony McGregor 2010


Posted by tonymcgregor at 11:45 No comments: