Yakhal' inKomo - the cry of cattle at the slaughter house 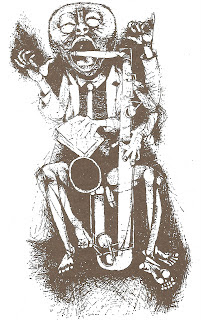 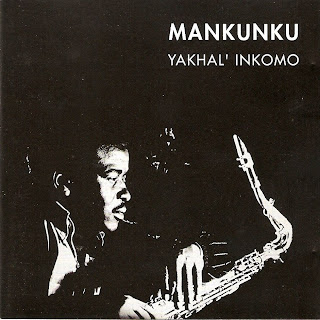 "I once saw Mankunku Ngozi blowing his saxophone. Yakhal' inkomo. His face was inflated like a balloon, it was wet with sweat, his eyes huge and red. He grew tall, shrank, coiled into himself, uncoiled and the cry came out of his horn.
"That is the meaning of Yakhal' inkomo." - Mongane Wally Serote: from the introduction to his collection of poetry entitled Yakhal' inKomo, published by Renoster Books in 1972.
From the first deep, broad notes of Agrippa Magwaza's bass one knows that this is a special album. The title track, Yakhal' inKomo, starts with Magwaza and pianist Lionel Pillay laying down a funky groove with a two-note bass ostinato until the soulful tenor of Winston Mankunku Ngozi comes in about four and a half bars later to lay down the main theme.
This theme came to be one of the most instantly recognisable in all of South African jazz. Fans at jazz gigs unfailingly greet these bars with shouts and cries of recognition. This composition by the man affectionately, and almost universally, known to jazz fans simply as "Mankunku" was taken into the hearts and consciousness of people from its first release in 1968, to the extent that it sold around 50 000 copies in its first two years. This is an incredible figure in South African jazz recording history, and made it the biggest jazz album ever released here, a position it still holds against some pretty stiff competition.
When this album was recorded apartheid was exactly 20 years old and many of Mankunku's peers had gone into exile and those who stayed had to endure what jazz writer Gwen Ansell, in Soweto Blues, called "symbolic annihilation" which "became part of the hegemonic staging and broadcasting of jazz," because "the white authorities found it unacceptable that black musicians should be acknowledged as capable of playing such 'sophisticated' music."
Ansell goes to relate how "Playing behind a screen at Cape Town City Hall while a white musician mimed his notes, reedman Winston Mankunku Ngozi was billed as Winston Mann."
Poet John Hendrickse, who knew a thing or two about jazz and South Africa, must have had this in mind in his poem “Remember” (in Khoi, 1990):

Where did you steal that culture
Where did you steal that suit
Fear gave him that sinking feeling
He’d been stealing dignity
His fingers minuet the music
Anger rises up inside of him
The warrior walks through the white menace
The music stumbles in staccato phrases
In a 2003 interview with Gwen Ansell, quoted in her book, Mankunku said:
“Yakhal’ inKomo was an odd tune. Things were tough then – but don’t ask me about all of that, I don’t want to discuss it. You had to have a pass; you got thrown out; the police would stop you, you know? I was about 22. I threw my pass away; wouldn’t carry it. We had it tough. I was always being arrested and a lot of my friends and I thought it was so tough for black people and put that into the song. So it was The Bellowing Bull: for the black man’s pain. And a lot of people would come up to me and say quietly: “Don’t worry bra’. We understand what you are playing about.”
An interesting story of the composition of Yakhal’ inKomo comes from Lars Rasmussen’s great book Jazz People of Cape Town (The Booktrader, 2003) in an interview Rasmussen recorded with pianist Roger Koza, who recalled:
“...I started the whole theme, with chords and all that, and Winston came in, he was a professional, and started building it up, and we used to call it another name...”
Koza continued: “So Winston came back from Jo’burg with this tune and I said, Hey, this is our tune! Listen to this tune! It was no more called Khale, it’s called Yakhal’ inKomo. I said, Who called it Yakhal’ inKomo? And he said, No, it was Pat Matshikiza.”
This story of tunes being swapped between musicians is a common theme in South African jazz. It seems to be part of the struggle musicians have to survive and goes along with the recurring themes of unscrupulous promoters and exploitative recording companies. In the twilight zone that jazz had to occupy during the apartheid era this is not surprising. As Mankunku said, things were tough for black musicians in South Africa.
Whatever the truth of the birth of this iconic jazz piece, it struck chords deep in the psyche of black South Africans at a time when the pain of apartheid was searing. As Serote wrote in another place about Mankunku: “He just went deep, right down to the floor of despair, and reached the rim of fear and hatred. He just spread and spread out and out in meditation, with his horn, Mankunku, Ngozi, that guy from the shores of South Africa, and he said: “That was it.” For that is what he was doing with his horn, Yakhal’ inKomo...” (Quoted in Michael Titlestad’s Making the Changes, Unisa Press, 2004).
In his introduction to his collection of poems called Yakhal’ inKomo from which I quoted at the beginning of this piece Serote also quotes artist Dumile Feni as an explanation of the title:
“Dumile, the sculptor, told me that once in the country he saw a cow being killed. In the kraal cattle were looking on. They were crying for their like, dying at the hands of human beings. Yakhal’ inkomo. Dumile held the left side of his chest and said that is where the cry of the cattle hit him...Yakhal’ inkomo. The cattle raged and fought, they became a terror to themselves; the twisted poles of the kraal rattled and shook. The cattle saw blood flow into the ground.”
It is not too difficult to see the historical significance of these words in the midst of apartheid South Africa.
Writing about the representation of jazz in South Africa and the charcoal drawing by Dumile Feni called Musicianaire Titlstad writes: “... the saxophone has the capacity, as an instrument of witness, to give voice to the irruptive sorrow of oppression...”
The rest of the album is taken up with Mankunku’s Dedication (to Daddy Trane and Brother Silver), Silver’s Doodlin’ and Coltrane’s Bessie’s Blues, Dedication at more than 10 minutes the longest track of the four.
As Rob Allingham wrote in the sleeve notes to the 1996 re-issue of Yakhal’ inKomo (issued with the five tracks of another album called Spring, recorded within four months of Yakhal’) Mankunku’s recordings “beautifully melded a distinctly South African style of jazz with what was then the cutting edge of the contemporary jazz scene in the US.”
Allingham told me in an email response to my questions about this album, Yakhal’ inKomo has been “...more or less continuously in print ever since it was first released”, testimony to its enduring popularity and status among aficionados both in South Africa and beyond.
This is an album of beautiful music that still stirs emotional responses by its expression of human pain and endurance, remembrance and invocation – Yakhal inKomo!
Pretoria
22 July 2008
Posted by tonymcgregor at 08:54 1 comment: