I will also, in the main, write about albums that are available on CD, though there might be some exceptions. The reason for this is that CDs are simply more accessible these days than vinyl. I don't even have a turntable anymore, though that might change sometime!

The albums I will be writing about are:

2. The exile releases:
Each of the albums listed above is in my view a classic. Classic in the sense that each one epitomises the vitality of the music and the explorative searchings of the artists involved. I will also with each posting try to indicate where these albums are available. Many are available through Amazon.com but others might not be so easily obtainable.

Some of the albums, like Mannenberg and Yakhal inKomo have achieved almost cultic status among jazz fans in South Africa. Others, like Very Urgent and Live at Willisau are almost unknown in the community of South African jazz fanatics.

There are of course many more albums both local to South Africa and released abroad that are great and I will I hope get to writing about them also in time. The ten that I have selected to write about now are a personal selection and in no way indicate a negative view of any albums so far not listed - watch this space, as they say!

Jazz in South Africa has been called "the peoples' music" though I'm not sure that this still applies. Like jazz elsewhere it has become something of a specialist interest, though it is still written about quite frequently. Indeed two recently published books bring out some of the magic and excitement of South African jazz.

Firstly the brilliant Soweto Blues by Gwen Ansell deserves an honoured place on any jazz lover's bookshelf. It was published in 2004 by Continuum, New York. It is a distillation of the best parts of an eight-part radio series called Ubuyile/Jazz Coming Home which was broadcast on the network of community radios in South Africa.

Secondly the photographer Jurgen Schadeberg, who wonderfully captured the images of the heyday of South African jazz in the 50s and 60s, has produced a book entitled Jazz, Blues and Swing, with great photographs and written contributions by Don Albert, Gwen Ansell, Darius Brubeck and Hotep Idris Galeta. Its a wonderful book published by David Philip in 2007. This book also is highly deserving of a place on your bookshelf.

The place of jazz in South African culture and society was acknowledged recently by President Thabo Mbeki who honoured the exiled Blue Notes with one of South Africa's highest official honours, the Order of Ikhamanga in Silver, for "excellent achievement in the genre of jazz music, contributing to the development of music in the South African townships and defying the apartheid laws by forming a multi racial group."

So, official recognition at the highest level for an art form that not too many years ago was regarded officially as beyond the pale.

This is the jazz that I will celebrate on this blog over the next little while. This is the music that has inspired, comforted and uplifted people for many decades, through the unbelievably dark days of the apartheid era and into the new dawn of freedom for this beautiful country. This music was the sound track of the struggle and is now the emblem of freedom. Its practitioners suffered for the music and many have died along the way. I celebrate their memories also.
Posted by tonymcgregor at 09:22

The story of jazz in South Africa is one of ups and downs, highs, lows, laughter and tragedy. In fact it is much like the lives most of us live day-to-day.

Out of this mess, every now and then, something very special arises. What we celebrate this evening is one of these special things. 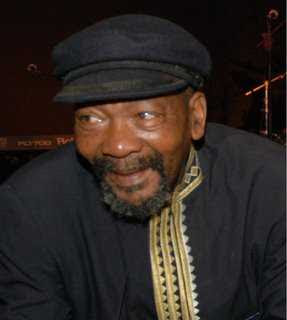 In 1964 seven brave people started out on an amazing journey of faith, hope and daring. Six young men and a young woman left the known of home and went off to the unknown in Europe. Of these six young men only one is still alive today: Louis Moholo.

Of the five who are no longer with us we celebrate in a special way the music of Chris McGregor. And its good to celebrate it because it is very special music which has not been heard much back here in South Africa.

But at the same time we should not forget, Chris would want us to remember, that what he did he did because of the support and friendship of the others. So tonight we should not forget Nikele Moyake, Mongezi Feza, Johnny Mbizo Dyani, and of course, Dudu Pukwana, whose relationship with Chris was not unlike that between Duke Ellington and Johnny Hodges.

Their music was an expression of the pain and the joy of South Africa, not a direct political statement but a lived experience which touched the hearts and minds, not to mention the dancing feet, of those who heard them in those cooler northern climates.


The music we celebrate tonight is particularly that of the Brotherhood of Breath. Chris had long had a desire to express himself through the medium of a big band and the Brotherhood became, as some have remarked, Chris’s true instrument.

We do well to remember, though, that the Brotherhood was rooted in the South African experience as mediated through the Blue Notes.

The Brotherhood always had at its rhythmic heart South African rhythm men: Louis Moholo and Gilbert Matthews on drums; Johnny Dyani, Harry Miller and of course Ernest Mothle on bass. We are very grateful that Bra Ernest is still very vibrantly with us and has so ably directed the music for this celebration tonight. Bra Ernest – we salute you! (Photo above is of the master bassist).

This evening is in a way completing a circle. Chris started his big band career here with the Castle Lager Big Band back in 1963. And what a blast that was!

So tonight we are bringing the music home again. And like many homecomings this one is bitter-sweet. The music is home again but our brave compatriots are not. So we rejoice in the music and the spirit of love and joy it brings. And we say thanks to those brave spirits who created it. They live on in this music.

And of course for me personally, if I might be allowed to bring in a more personal note here, I am here to remember and honour my brother. Chris was a great big brother, big in more ways than one, and I still miss him.

Finally – thanks to all of you for being here to honour Chris, Dudu, Johnny, Mongezi and Nikele, and the spirit of the Brotherhood of Breath.

Posted by tonymcgregor at 09:06 No comments:

Most folks reading this know the story of Chris and his magnificent, fun and wild big band comprised of fellow South African exiles as well as the cream of the early/mid 70s British jazz scene. During their heyday, they were only able to release three studio albums and all were out of print within a few years and despite the huge acclaim they received during from the period of about 1971-1975, Chris and the Brotherhood were basically forgotten by the time of Chris' death in 1990. Luckily, the band performed many, many concerts and a good number of these concerts were recorded. With the release of our first archival album by Chris and the Brotherhood, huge acclaim for our releases and even better, notice for the band, began to happen and they are now rightly recognized as one of the major bands and figures of Brit-jazz in the 1970s.
Eclipse at Dawn captures the band at an early peak, performing in front of a huge, rapturous crowd at the Berliner Jazztage on November 4, 1971. Recorded by German radio, this is probably the best live recording of the Brotherhood in existence! There is a version of Dollar Brand's composition "Eclipse at Dawn", which the Brotherhood never recorded anywhere else, as well as exciting, wild & extended versions of many favorities from their first two albums. Included in the 16 page booklet are never-before published photos from the concert and liner notes.

"Some of the most exciting sounds to be heard in busy London in the early 1970s..."-Downbeat

"...a big band as sophisticated as Duke Ellington's, but as riotous as a New Orleans street parade."-Launch