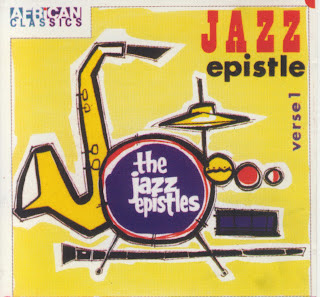 The group consisted of Abdullah Ibrahim (then still known as Dollar Brand) on piano, Hugh Masekela on trumpet, Jonas Gwangwa on trombone, Johnny Gertze on bass, Makaya Ntshoko on drums and the "sad man of jazz" Kippie "Morolong" Moeketsi on alto and clarinet. The band was called the Jazz Epistles and became very well-known to jazz lovers in South Africa.

This group had grown out of the band put together by visiting United States jazz educator John Mehegan which recorded in 1959 two albums called Jazz in Africa Volumes 1 and 2. This band had as rhythm section Claude Shange on bass and Gene Latimore on drums with Mehegan on piano. These recordings are described by Gwen Ansell in her book Soweto Blues (Continuum, 2004) as "... music at the cusp, with elements of the old swing training and discipline, plus the risk-taking and speed of bebop and a conscious African awareness, on original and standard compositions." 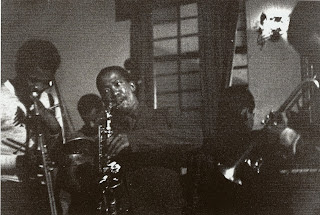 eft to return to the States Moeketsi in particular wanted a group to play more adventurous and challenging material and so he, Masekela and Gwangwa looked around for a rhythm section and found Ibrahim, Gertze and Ntshoko who were prepared to go further in exploring new ideas in music. This group came to have an extensive following after playing at various venues around the country. And where the Jazz In Africa group had played mostly standards with a sprinkling of South African material, the Jazz Epistles included no standards on their album. All the songs were composed by members of the band, four by Moeketsi, three by Ibrahim and one by Masekela.

This studio date was two months almost to the day before the Sharpeville massacre which was to turn South African politics into an international affair with the outside world denouncing the killings which shocked many into an awareness for the first time of the viciousness of the South African fascist regime. 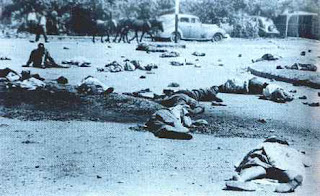 "On March 21, 1960 the Sharpeville massacre occurred when the South African police opened fire on black civilians protesting the abhorred Pass Law, which restricted them to certain areas and forced them to carry passes at all times. 69 people were killed and 178 wounded by police during the violence.
"Sharpeville Day has been commemorated since then on 21 March, and since 1994 has been the official Human Rights Day public holiday." (From the Wikipedia article on Sharpeville.)

The album opens with the Masekela composition Dollar's Moods, dedicated to the group's pianist. This is an upbeat and humorous number with some lighthearted but interesting soloing from Moeketsi, Masekela and Gwangwa before the dedicatee weighs in with a chorus or two of his own, with some typical Ibrahim chords. Gertze also has his say before the group brings it all to an energetic close.

The next number Blues for Hughie, written by Moeketsi, is a 12-bar blues excursion which, after some rather funky ensemble work in the introduction gets down and dirty with some fine soloing from Masekela, including some interesting tonguing, before Moeketsi gets in on the act with a fine bebop take on the melody. Gwangwa makes it all rather sombre with his solo sounding like a melodious fog-horn. Ibrahim's solo takes it all back to the beginning again, with the ensemble closing off the track.

Uku-Jonga Phambili (looking ahead) is a number written by Ibrahim a few years before and is a great showcase for his playing, which he does alone on this track with only the rhythm section in attendance. Gertze contributes a beautiful, soulful solo.

Next up is Moeketsi's hauntingly beautiful balad I Remember Billy, which, according to the liner notes, was originally titled Free and Easy. Moeketsi plays this number on clarinet, as he does on the later Jazz: The African Sound album which I will be writing about soon.

The next selection is Ibrahim's rather jaunty Vary-Oo-Vum, which acco 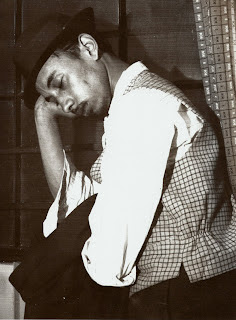 rding to the liner notes is dedicated to "Cape Town author Howard Lawrence." According to the wonderful book Cape Town Jazz 1959 – 1963, featuring the photographs of Hardy Stockmann, “Howard was a close friend of Dollar Brand.” (Copenhagen: The Booktrader, 2001). At the time of this recording Lawrence was a journalist on the Post newspaper and indeed was known as “Mr Post.” I have looked for other references to Lawrence and the only one I have so far found is in anti-apartheid and former Robben Island prisoner Ahmed Kathrada's autobiography Memoirs. Kathrada calls Lawrence a photographer working for the Cape Times newspaper. Lawrence died in September 1981.

Carol's Drive, the next song, is by Moeketsi with a wonderful alto, bass and drums section which Moeketsi himself apparently loved. The authorship of this tune is somewhat in doubt as Gwangwa lays claim to it in his comments quoted by Gwen Ansell in her book Soweto Blues. Gwangwa described the influence the Epistles had on him as a musician and how he started to compose: “I was in Cape Town and we were rehearsing there with the Epistles and the guys left me alone - I don't know why, but I woke up and they weren't there! I sat at the piano that whole day, messing around until I came up with this tune ... 'Carol's Drive'. Then my composing thing was stating out ... and a style was being formulated, of course, only I was not aware of this.”

A piano solo piece by Ibrahim follows called Gafsa. According to the CD inlay notes: “It tells of a man who was madly in love with a wonderful woman. She dies, but her vision comes to him as he walks through the streets of Cape Town on a misty night.” Beautiful, typically Ibrahim, evocative and lyrical, befitting the subject as described.

The final track is a theme by Moeketsi and is “about” the treatment of the band by a white club owner. The incident is described in Peter Esterhuysen's book Kippie Moeketsi Sad Man of Jazz (Viva Books, 1995): “One evening the Jazz Espistles were playing in a Johannesburg nightclub. When they took a break the owner led them to the kitchen. He gave the musicians a meal. Then he went back inside his club. While the Epistles were eating, Kippie became very cross. He said, 'By right, you know Dollar, this is all nonsense – this idea of us being taken into the kitchen when there's a break. Are we 'kitchen boys'? Aren't we here to entertain the people?' 'Ja ou pellie,' Dollar answered, 'ons kom nou en dan by die kombuis ... the scullery department.' Kippie started to make up a new song right there in the kitchen. He called his new song 'Scullery Department.'”

Each member of the band had an interesting life story. 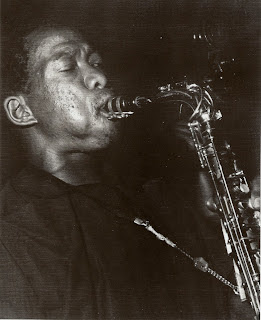 Probably least known of this group outside of his home country, the “sad Man”, Kippie Morolong Moeketsi was often referred to as the Charlie Parker of South Africa. He was a man of immense talent and imagination, whose sensitivity led him down a self-destructive path of alcohol and neglect in the face of repression and exploitation. Moeketsi, after the Epistles, joined the pit band of the show King Kong and was with the show for its London season. While there he had many confrontations with the management of the show and this led to more erratic behaviour and his eventual stay in a mental hospital where he was subjected to Electro-Convulsive Therapy and then sent home.


Makaya Ntshoko had trained as a boxer who had ambitions of becoming a champion. Or maybe his family held those ambitions. The other musicians had to beg his family to let him play, especially when Ibrahim and Gertze wanted to take him to Europe with them. He was born in Cape Town where he had connections with many of the great names of the jazz scene there: Morris Goldberg, “Cups” Nkanuka, Banzi Bangani and Phakamile “Phaks” Joyo and others. 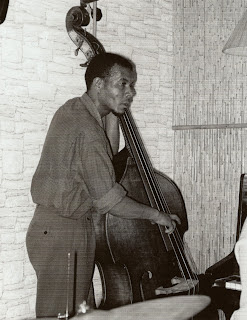 ny Gertze was also from Cape Town where he had worked with Ibrahim. He was born in 1937 and besides the bass played trumpet, clarinet and guitar. After some years in exile with the Dollar Brand Trio he returned to South Africa in 1968 and died of a brain tumour in 1983.

Abdullah Ibrahim, then known as Dollar Brand, was born in 1934. He started playing professionally at 15 and in 1954 was recorded with the Tuxedo Slickers, a 15-piece big band. In 1958 he backed the Manhattan Brothers, a very popular singing group, on their tour of the Eastern Cape.

Jonas Mosa Gwangwa was, along with Hugh Masekela, an alumnus of the famous Trevor Huddlestone Jazz Band. This band was made possible by the well-known Anglican cleric who lived in Sophiatown in the 1940s until he was expelled by the Nationalist Party government in the mid-1950s. Huddlestone vigorously opposed the removal of Sophiatown residents in terms of the infamous Group Areas Act and so earned the wrath of the Government of the day, but the enduring love and appreciation of the people of Sophiatown. Huddlestone's book Nought for Your Comfort details his struggle to prevent the removal of Sophiatown.

Hugh Masekela grew up in Witbank to the east of Johannesburg. In his autobiography Still Grazing Masekela tells of hearing, at the age of four, the famous Jazz Manics, one of the top jazz groups in South Africa at the time, and, as he puts it, “... music first captured my soul, forced me to recognize its power of possession. It hasn't let go yet.” Moeketsi was a member of the Maniacs at that time and this was the first time Masekela heard him play. When he went to St Peter's School in Rosettenville, Johannesburg in the early 1950s he and some of the other boys became interested in music. Fr Huddlestone scrounged instruments for them and they began to practice seriously. Masekela says: “Huddlestone enjoyed our enthusiasm.”

So the Epistles were 50% Cape Town musicians and 50% Johannesburg musicians, but 100% into a new style of jazz for South Africa – harder-edged, more bop-oriented than the more usual swing-oriented groups that were popular at the time. This was a historic album indeed.

All the above musicians' photos above were taken by Hardy Stockmann and published in the book Cape Town Jazz 1959 - 1963.

Posted by tonymcgregor at 14:01 No comments: