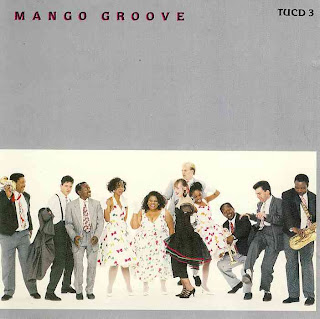 A new sound in South Africa

In 1984 a new sound rocked the souls of music lovers in South Africa - a sound that combined the horn-rich sounds of marabi and early Afro-jazz with the infectious foot-tapping rhythms of kwela, the popular penny-whistle music of the streets of South Africa from the mid 1950s.
The sound was that of a group of around 11 members called Mango Groove and it has kept party-goers, disco-dancers and music lovers generally happy to this day, with an impressive list of albums and singles, most of which had long stays on South African charts.
Formed by bassist John Leyden, who, among other achievements, has a masters in philosophy, and some older compatriots from the older Black music scene such as "Big Voice" Jack Lerole and Micky Vilakazi, both of whom were well-known and respected musicians in townships and clubs of Black South Africa in the 1940s and 1950s.
Added to these great musicians was the beautiful voice and face of the then very young Claire Johnston who left school early to tour with the newly-formed band.
The music put together by this eclectic group is difficult to pin down and categorise - it's best just to listen and enjoy!

Sounds of sadness and protest

An early supporter of the group was the late David Webster, killed by apartheid regime goons for his opposition to the ideology and his exposures of the many evil deeds of the regimes people. When Webster was killed in 1989 the group composed a song "Taken for a Moment" in his memory and honour. It was released on the 1990 album Home Talk.
The lyrics include the words "Rising through the silence / Pushing back the folds of the dark / Narrowing the distance / Smiling on a moment apart / Words are left unspoken / And the beating heart is still / But dreams live longer / Than a dreamer ever will."
The next song on that album was another protest song, "We Are Waiting", which started with the words, beautifully sung by Claire, "How do we hide / The pain inside / We'll see it through / If we can share it with you."
Another of their songs became something of an anthem for the internal opposition to apartheid in the era of the so-called "states of emergency" declared by the regime in the mid- to late-1980s, "Another Country" - the words "You will walk beside me / I'll tell you no lies / And then you'll see, another country / in my eyes/ If we could reach beyond the bounds of blame..." seemed to speak to many who were struggling to see a brighter future ion the midst of all the cruelty, violence, fear and uncertainty caused by the situation. "But let's begin, to look within / to where the future lies..." 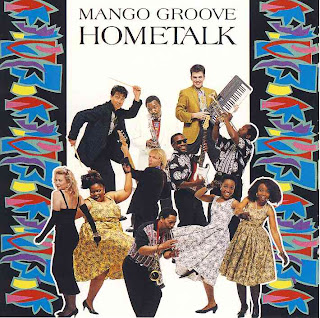 Mango Groove made a point of reviving classic South African jazz numbers with an updated sound and vocals, but with strong echo of the original sound. The songs they play sound a lot like the old time swing of the townships with wailing horns and keening pennywhistles, but the beat is more like rock. It is a heady and eclectic mix which makes it ideal for thoughtful listening or bopping at a party.
One of the songs which they recorded was the famous "Tom Hark" which was written by Big Voice Jack in 1956 and became a big hit in the United Kingdom in 1958 after it had been used as a theme for a TV show called "The Killing Stones". Sweet justice for Lerole that he was associated with its revival so many years later.
A song typical of the happy sound of Mango Groove is "Dance Sum More" off their first album, simply entitled Mango Groove. The track is introduced by famous jazz man Micky Vilakazi declaiming "Dance again, man, what's the matter with you?' and if you don't dance to this number nothing will get you to dance! Go listen!

The text and all images on this page, unless otherwise indicated, are by Tony McGregor who hereby asserts his copyright on the material. Should you wish to use any of the text or images feel free to do so with proper attribution and, if possible, a link back to this page. Thank you.
© Tony McGregor 2012
Posted by tonymcgregor at 21:05 28 comments: