electricjive: Morris Goldberg's Urban Jazz Band (1975)
When talking of Cape Jazz pioneers Morris Goldberg’s name is usually mentioned in the same sentence along with Dollar Brand and Chris McGregor. This gem was recorded in 1975 when Goldberg was visiting South Africa from his New York base. Both Goldberg and percussionist Monty Weber were part of the “Manenburg” legend. Goldberg was the third saxophone player whose name does not appear on the cover credits. Read some of the back-story here.
Posted by tonymcgregor at 20:43 No comments:

electricjive: The birth of Heshoo Beshoo
The band Heshoo Beshoo grew out of a great friendship. formed in the home of jazz promoter and founder of the Johannesburg Jazz Appreciation Society, Ray Nkwe.
Posted by tonymcgregor at 12:47 No comments: 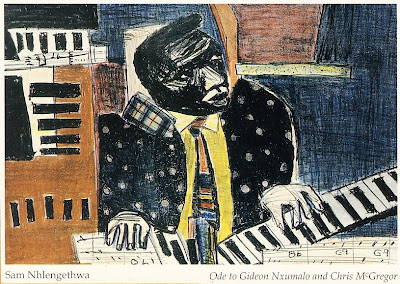