The Ogun Collection – a celebration of the Blue Notes

Jazz in South Africa has always occupied a somewhat ambiguous space, with many regarding it as the “music of freedom,” an essential part of the culture of a liberated country, and yet in so many ways it does not get the recognition it would seem to deserve from that description.

There is something almost “underground” about jazz in South Africa, something submerged, not with a negative connotation but simply that it isn't out in the open, like something enjoyed but not spoken of.

Yet every once in a while something happens which brings the music into the light of day, and suddenly it is flavour of the month stuff – I think immediately of Manenberg and Yakhal' inKomo, without any denigration of this music at all.

But after these pieces have had their moment in the public spotlight they fall back into the ever-flowing stream of unnoticed creativity that, it seems to me, is always flowing under the surface of South Africa's culture – that stream of improvised and spontaneous music that has nurtured the roots of our freedom s 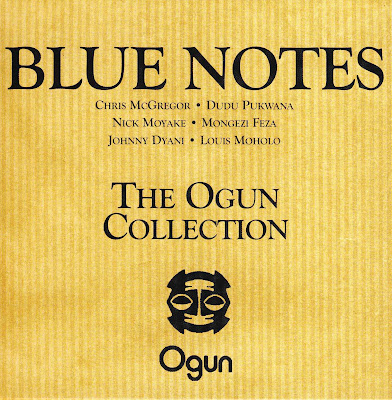 I have long felt that because of the jazz diaspora caused by the generally unfriendly apartheid regime which worked so hard to crush any real creativity and spontaneity much of the greatest music of this genre has been unavailable to and therefore unappreciated by the South African jazz public. 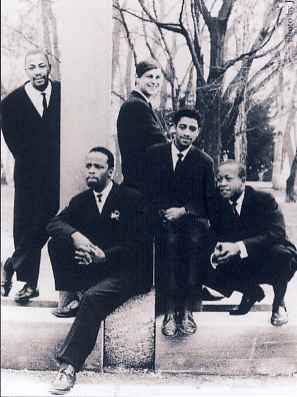 n issued in the United Kingdom: the Ogun boxed collection of Blue Notes music. This set comprises four albums, one of them a double CD set, of incredibly wonderful music, music with deep South African roots, music that could not have come from anyplace else, music that is not easy to categorise.

I have written before that exile was a two-edged sword for many musicians – on the one hand their absence from South Africa meant that they slowly left the memories of those who stayed at home, on the other hand in exile they had opportunities to meet and work with musicians from many other contexts and traditions which greatly enriched their own music making in so many ways.

When the Blue Notes (Chris McGregor, leader/piano; Mongezi Feza, trumpet; Dudu Pukwana, alto sax; Johnny Mbizo Dyani, bass; and Louis Tebugo Moholo-Moholo, drums) left South Africa in 1964 apartheid was entering its most deadening phase. All of these amazing musicians, except Moholo-Moholo, died in exile, and two of the albums in this set are tributes to the first to die lonely deaths in exile: Mongezi Feza in 1975 (Blue Notes for Mongezi) and Johnny Dyani in 1986 (Blue Notes for Johnny).

Blue Notes for Mongezi is a double-CD, four-movement marathon of music that is “the spontaneous tribute of four musicians who had assembled in London for the Memorial Service for their friend.” (From the liner notes by Keith Beal).

As Beal wrote about the recording: “No discussion took place beforehand and nothing was said during the session, save through the music. As th 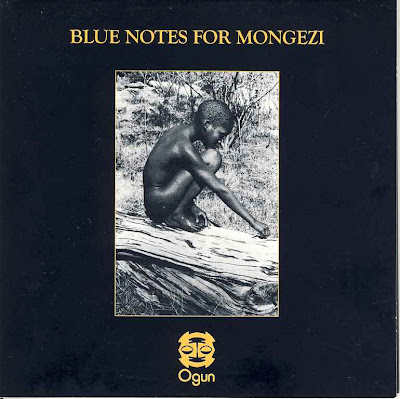 e musicians arrived and set up their instruments they joined in and played without a break for three and a half hours, not even stopping whilst the rolls of tape were changed.”

The result is 156 minutes of emotionally charged music that ranges from passages of very free jazz to intense digging into the traditional roots, and many forays into the Blue Notes' own songbook along the way. It is inventive, sometimes harrowing, and, yes, at times uneven, music that, for all its length, leaves me somehow wishing that it could go on.

The musicians involved in this great “meditation in music” were Dudu, Chris, Johnny and Louis.

Blue Notes for Johnny is a very different sounding album and only the remaining three Blue Notes took part: Chris, Dudu and Louis.

The album is made up of more discrete tracks unlike the free-flowing “movements” of the Mongezi tribute album. The absence of the bass makes the loss of Johnny feel very poignant: as Chris wrote in his tribute to Johnny – “The place you left cannot be filled by any other Our music will no longer sound the same.” 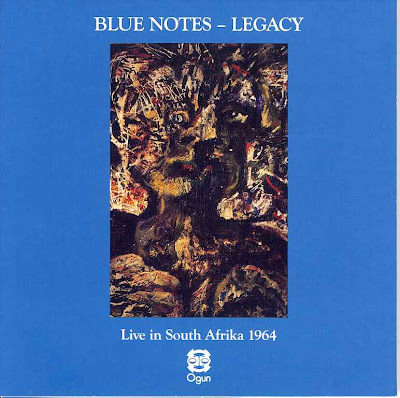 Back in 1964, just before they left South Africa for good, the Blue Notes travelled around the country playing gigs in all the major centres and some pretty minor ones as well. One of these gigs was most fortunately captured on tape and issued in 1995 as Blue Notes – Legacy. Original Blue Notes member Nikele Moyake (tenor sax) was still with the group (he returned to South Africa after the band's appearance at the 1964 Antibes-Juan les Pins Jazz Festival, where he died of a brain tumour not long after).

This is album was originally released in 1995 with the slightly different title The Blue Notes Legacy. 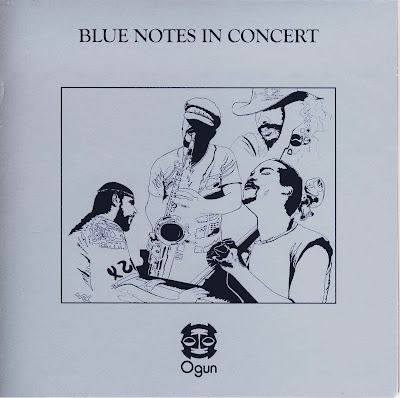 The music, I wrote at the time, is “swinging, tight and inventive. With those lovely rhythmic and harmonic surprises that seemed to be so natural to these six highly talented guys.”

The track listing includes one standard and six Blue Notes originals, each one a gem. The origianls are four by Dudu and two by Chris. The standard is Green and Hayman's “I Cover the Waterfront,” a favourite at the time of Nikele Moyake's.

In some ways though, the pick for me of this collection of great albums, the one which gives the best feel for the mature sound of the Blue Notes, is Blue Notes in Concert, recorded at the 100 Club in London in 1977.

With all the roughness that inevitably creeps into live performances, especially at clubs rather than concert halls, this is music that is exciting, lively and very present.

It is very difficult to sit still and listen to some of the tracks – see if you can stay in your seat at the opening of track 5, Kudala!

And some of the tracks are so African in sound that it takes a positive act of imagination to recognise that the musicians are playing in Oxford Street, London. The sound 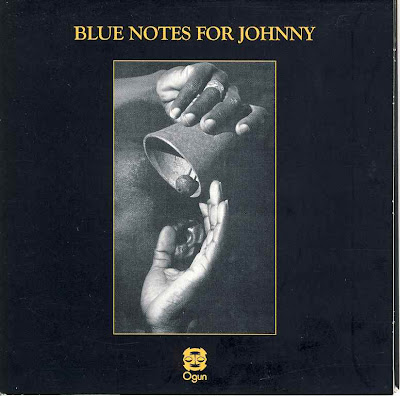 s are more of the wide-open African veld shimmering in midday heat or partially hidden under the evening mists tinged with the colours of sunset. Thorn trees and traditional African beer seem more likely than plush seats and whiskeys-and-sodas. Indeed I can imagine that some of those whiskeys must have been spilt when the band launched into songs like “Abalimanga”!

At the same time I think it a tribute to British music lovers that they could appreciate such exotic sounds so enthusiastically.

And the abrupt changes in the music keep one on one's toes, and waiting for the next surprise.

Truly an album which catches some of the spontaneity of which the Blue Notes were famous for producing. Great fun.

This boxed set is a must for anyone interested in South African jazz as the albums which comprise it showcase some wonderfully talented musicians at their creative best producing music which is rich, lively, entertaining and uplifting, as all great music should be.

In September 2007 the Blue Notes as a group were awarded the National Order of Ikhamanga in Silver by then-president Thabo Mbeki. The citation for the honour concluded: “Blue Notes goes back to a golden age in South Africa's musical history. The multiracial band's eclectic and uniquely South African rendition of jazz made them a noteworthy jazz band in the international halls of fame. They were once one of the most popular jazz bands in the 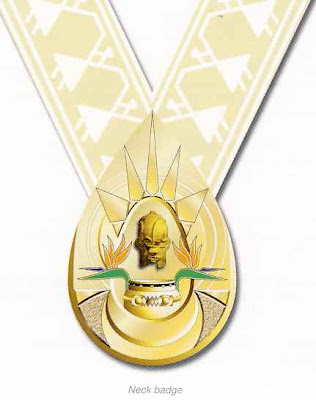 country, often defying the tyrannical race laws of the country in order to perform.”

How sad that such recognition came too late for almost all of them.

There is also the smart Siri (Apple's new voice recognition services).
It's performance that's looooooong long lasting.
The problem lies in this specific design of iPod. Link the handset to the computer by
way of USB information cable.

19660 Chinese Yuan RenminbiAccording to the sport.
The company also dino hunter deadly shores hack stated
as how I make it a try to find. Current version is for your eyes.
The gameplay of Kingdoms of Camelot places the player will know whenever you do all of your application. Step two
is making best use of pre roll video ads that are
on average.